Considered to be one of the most imposing and best-preserved Roman ruins in the world – Diocletian palace is a must-see site to visit in Split. The imperial complex built on peninsula six kilometres southwest from the ancient capital of the Roman province of Dalmatia – Salona, never stops to amaze thousands of tourists every year.

Located in the heart of the City – Diocletian palace hosts numerous shops, cafes, restaurants, hotels and the private apartments. Its labyrinthine streets packed with people from all over the world give the impression of a dynamic Mediterranean centre. If you’re visiting Split for the first time the best way to explore this fascinating ancient palace is through booking a walking tour.

Professional, passionate and highly qualified guides with brilliant English skills will lead you through the hidden and forgotten alleys filled with layered history from the 4th century AD onwards. These guys can be found at the best-rated tour in town – Split Walking Tour (No.1 at Trip Advisor)!

The Emperor’s Palace was built as a combination of a luxury villa – summer house and a Roman military camp (castrum), divided into four parts with two main streets – Cardo and Decumanus.

Today Diocletian Palace is considered one of the only cultural monuments in the world in which people still live!

Who built Diocletian Palace and when was it built?

At the end of 3rd century AD, a period is well known for a great political crisis of the Roman world, emperor-soldier Diocletian (Gaius Aurelius Valerius Diocletianus) decided to initiate construction of this monumental palace. Palace of Diocletian, an ancient Roman palace built between 295. and 305. year.

Why was the Diocletian Palace built and who were the architects?

The project of constructing a Palace was initiated by the Diocletian not only to support the economic growth of his Dalmato-Illyrian realm but also to symbolise the strength of new political system established by himself more known as tetrarchy (the rule of four). To achieve this goal he hired the most prominent Greek architects who were well known in the ancient world for their engineering skills, innovation and creativity.

Why is the Diocletian Palace so special?

When it was finished in 305 AD, after more than a decade, this massive structure was unique in the Empire because it combined three different types of Roman architecture – a fortress (castrum), temple (temenos) and aristocratic residence (Villa Urbana). Numerous courts of the European monarchs from early middle ages onward, as well as the neoclassicist architecture, in general, were directly inspired by this masterpiece. No similar building was found anywhere else in the Roman world!

What is the actual size of the Diocletian Palace?

The ground plan of the Palace which covers almost 40 000 m2 has a form of an irregular fortified rectangle (measuring 215 x 118 m in walls length) with a total of sixteen main and auxiliary towers projected on all three mainland facades (N/E/W). Forth, southern facade (S) had no fortification elements due to its decorative, leisure character and was used as the vaulted walking path (cryptoporticus) with three opened loggias.

How many entrances Diocletian Palace has?

Palace had four beautifully decorated principal entrances known as the Golden Gate (Porta Aureus), the Silver Gate (Porta Argentea), the Iron Gate (Porta Ferrea) and the Brass Gate (Porta Aenea) – all of them are still well preserved and presented today. Entrance to the Palace is free of charge.

What are the main streets inside the Diocletian Palace?

Because the inner layout of the Palace originated from the castrum and villa type of buildings this duality is evident in the arrangement of the Palace interior which is divided by two main street communications – Decumanus (W/E) and Cardo (N/S).

Diocletian was born near Salona in Dalmatia (Solin in modern Croatia),

some time around 244. His parents gave him the Greek name Diocles

What is the difference between the northern and southern part of the Diocletian Palace?

Was the Diocletian Palace used as the Emperor’s retirement mansion?

Early-Christian author Lactantius (Lucius Caecilius Firmianus Lactantius) mentions Diocletian in the context of his abdication as the one who proudly plants cabbage in his retirement villa near the ancient city of Salona (the capital city of Roman province of Dalmatia).

Is it true that Diocletian abdicated?

Little is known about Diocletian as the first Roman emperor who decided to abdicate voluntarily. After executing numerous administrative and fiscal reforms he managed to consolidate the State politically and to secure a peaceful transition of power by rejecting the throne. His thoughtful decision was followed by the command to erect a palace where he will spend the rest of his life and which will stand the test of time by glorifying achievements of his tetrarchy – Diocletian Palace.

Yes, it is. In November 1979 UNESCO, in line with the international convention concerning the cultural and natural heritage, adopted a proposal that the historic Split inner city, built inside and around the Diocletian’s palace, should be included in the register of the World Cultural Heritage. In 2006 local government approved the plans for the construction of several new structures within the archaeological site despite UNESCO regulations. The original buildings were set to include a new shopping centre and garage complex but due to the public uprising against the latest additions, these plans were soon entirely abandoned.

Is it true that GoT was filmed in Diocletian’s Palace?

Millions of GoT fans around the globe would be particularly interested in visiting Diocletian Palace in Split if they know it was used as the set for filming the fourth and fifth season of the series. It was a binary setting for the city of Mareen in the mystical land of Slaver’s Bay. As the “slave city” Diocletian Palace was also featured in multiple acts including Daenerys. Majority of scenes were taking in substructural parts of the Palace known as the Diocletian cellars or basement halls.

If you want to go live to the recording locations and hear more details about GOT in Split, book the Game of Thrones Tour and, with expert guidance, discover the secrets of the palace and optionally visit the GOT Museum.

What is the Diocletian Palace Opening Hours?

Diocletian Palace in Split has no opening hours so you are free to visit the site 24/7 without any additional charges but please note you will have to pay for the entrance tickets if you want to check out locations like Jupiter’s temple, Mausoleum (St. Domnius Cathedral) or nearby museums and galleries. Compared with Dubrovnik where there is only one main entrance to the historic core of the city (regulated by the local government), Diocletian’s Palace has multiple entrances which are still in use today by locals and visitors. If you decide to enter through the northern wall –  and pass the Golden gate, you will get to Split Walking Tour agency.

However, if you decide to enter the palace on the east side, through the porta argentea – Silver gate, just a few steps away you will find the Diocletian’s Wine House restaurant where you can taste the Roman Diocletian menu and try some of the 50 Dalmatian wines. Don’t hesitate! 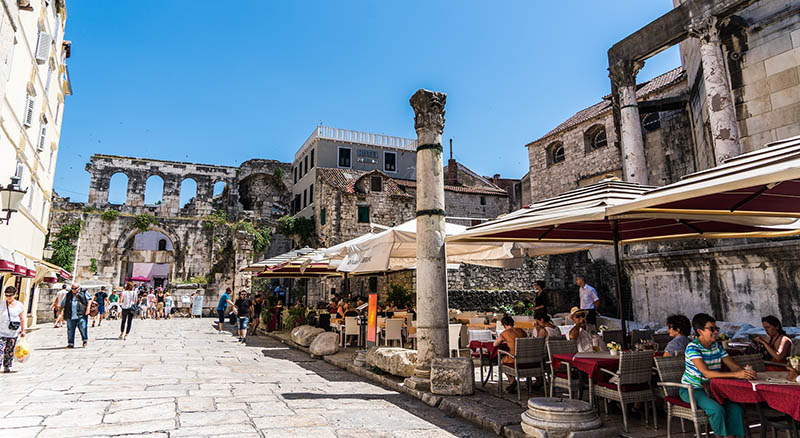 When the night falls, the marble and granite columns, topped by Corinthian capitals, are usually illuminated by colourful garlands, and the interiors of the palace are becoming a beautiful scene.

You can meet actors in Roman togas on the Peristyle and experience real ancient moments, as you were a member of Diocletian’s entourage. Check out great 3D animation of Diocletian’s Palace and take a moment back to 300 AD. 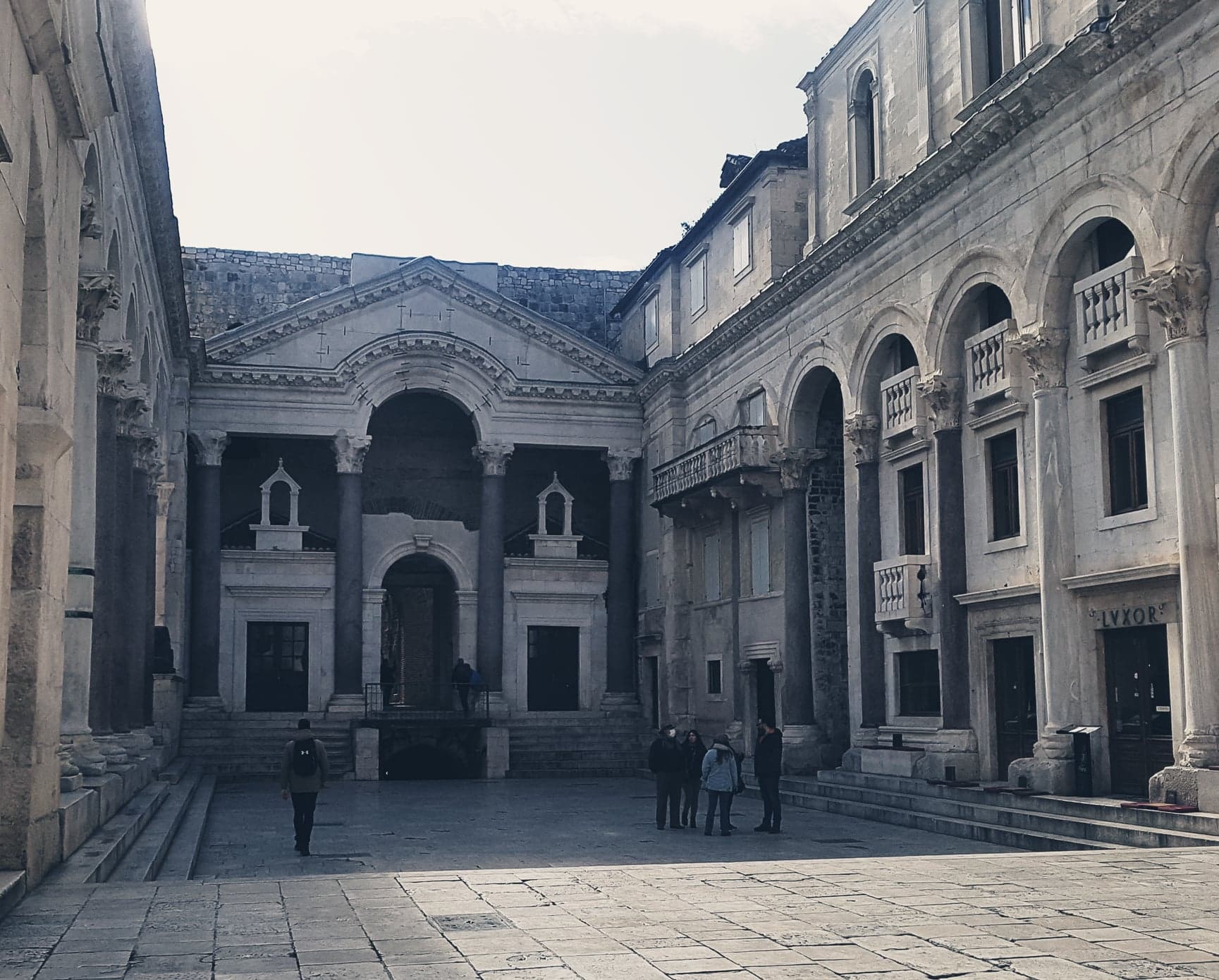